Millions of men were mobilized for the war, and illustrators often focused on an "everyman" to carry the message of their creations. Sometimes this was the poilu poilu, a fond but satirical characterization of the foot soldier as a "hairy beast," sometimes the permissionnaire, a soldier home on leave, sometimes simply the brave man fighting for France. 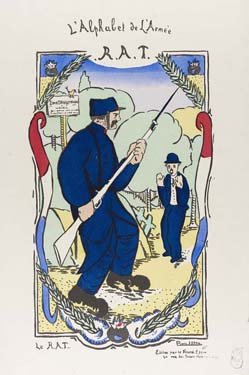 Just as the exact uses of these kinds of portfolios remain to be identified, the meaning of the abbreviations in Abadie's alphabet of vividly hued sheets is not always apparent today. The word rat in the French military was a pejorative term applied to persons in authority. But during World War I "rat" might also mean a base rat, that is, a soldier who stayed at base camp rather than going to the front. What does seem clear is that this poilu — a literal illustration of the slang term "hairy beast" — is preventing a civilian from entering a dangerous area. This confrontation has turned the trespasser into a cartoon convention of fear.