The threat of war, shifting alliances, and accompanying intrigues had been roiling Europe for decades before the assassination of Archduke Franz Ferdinand of Austria, on June 28, 1914, thrust the Triple Entente into combat with the Central Powers: Germany and the Austro-Hungarian and Ottoman empires. Invaded countries and others now joined the French Republic and the British and Russian empires to create the Allies. French illustrators used a number of techniques to show unity in diversity: visualizing national anthems, introducing foreigners in their various uniforms, gathering together colorful flags, picturing soldiers from many countries fighting for the cause. Assorted publications defined the group differently. The portfolio Hymnes alliés featured twelve allies, unusually adding China. 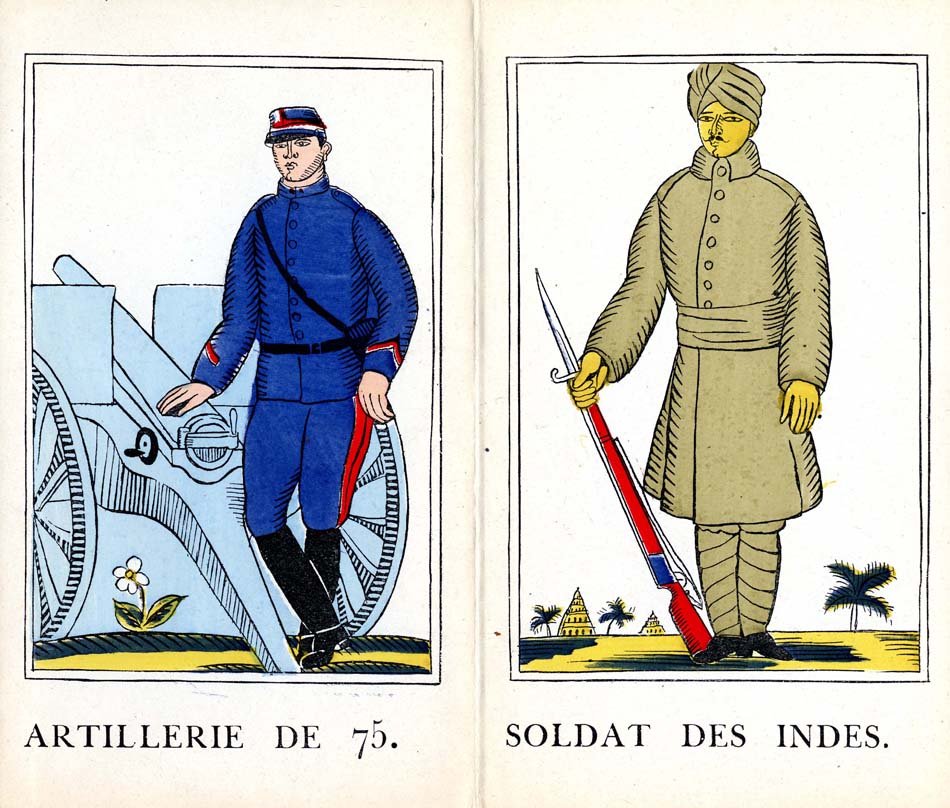 As an artist of the French avant-garde, Dufy is frequently classified as a Fauve. During the Great War, however, he adopted a purposefully simplified style, evoking the brightly colored popular "Epinal" prints, frequently nationalistic, inexpensively produced, and widely distributed in the nineteenth century. In a style even more naive than his sources, Dufy produced posters and pamphlets for the French Press Commission. In this work, he represents the Allies as of 1915. According to legend, the French artilleryman is a portrait of Dufy's friend Guillaume Apollinaire, a member of the Thirty-eighth Regiment. The poet and playwright was seriously wounded in 1916. On loan from a private collection The deployment of such portfolios as Les hymnes alliés is undetermined, but if anyone did affix the depictions of the twelve Allies plus the cover sheet to a wall the most eye-catching would certainly have been this one. Lucien Laforge created an almost abstract composition of unmodulated blocks of brilliant red, blue, and orange with a green triangular accent on the horizon. The staunch Montenegrin stands on a rocky outcropping on the edge of the Adriatic Sea, perhaps at the Port of Bar. He looks toward the horizon where we might see a French ship outrunning the blockade to bring much-needed supplies. The United States formally entered World War I on April 6, 1917. Hermann-Paul's contribution to the series celebrates the land of the free and the home of brave. In a circle of support, a contemporary American doughboy, with the industrial might of the United States behind him, joins hands with an eighteenth-century French soldier, behind him the French ships that came to the aid of the fledgling republic. Under the stars and stripes at the center of the composition the Statue of Liberty represents the goals of the struggle and the historic friendship between France and the United States. Created on the occasion of President Wilson's visit to the Paris Peace Conference, the cover of Laboureur's book depicts women and children waving welcome as the American forces arrive in France. The other illustrations, printed in black on a ground of either green or yellow, present faces of the Americans, beginning with the General, and including every branch of the military. An African American dockworker comes before the pilot, and bringing up the rear is the secretary who helps manage them all. The strong lines and minimal details of the portraits, done in woodcut, make this one of Laboureur's most distinctive wartime works. In addition to numerous portfolios and large-format books on the war, Guy Arnoux created a series of small, almost postcard-size books featuring the French or their allies. The spare and strong illustrations portray a typology of the troops fighting for the noble cause, although they seldom stray beyond stereotype. In Le bon Anglais we see the Irish making merry, an English major relaxing against a bar, and the Black Watch in their plaid trousers and kilts. Even the staunch soldiers from the USA and France take note of their compatriots dressed in skirts in Nos frères d'amérique (Our American brothers).